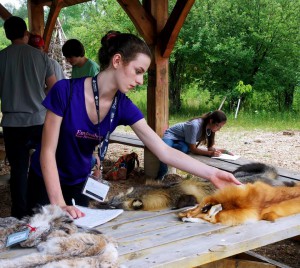 New Brunswick’s provincial environmental education competition.  Schools / groups can register a team of five students, with up to two advisors (teachers, parents, or interested volunteers) to guide the team. Resource materials, virtual workshops, activities, and contact people, are available to help teams prepare for the annual provincial competition in May.

NEW! Middle School Challenge: – We are looking for middle school teachers to work with the Envirothon NB program to pilot it in their classrooms with potential participation at the Competition in May. Contact the Envirothon NB Director, Becky Geneau for more information.

Throughout the school year, teams increase their knowledge of five environmental subjects:

Workshops are available both in-person and virtually (following COVID-19 safety measures) with professionals and are offered throughout the year in preparation for the provincial competition. At the Envirothon NB Competition in May, the students’ theoretical and field knowledge is examined through outdoor or online field tests under the supervision of natural resources professionals, such as aquatic and wildlife biologists, foresters, and soil scientists. During these field tests, the students will be asked to do such things as identify species of trees, describe nutrient cycles in aquatic systems, and identify signs of wildlife. During the competition, the teams are also asked to devise and present a proposal to deal with a serious environmental concern presented to them in advance. Integrating all five subject areas, and presenting their proposal in a manner that the public will understand, helps students understand real-world issues involving ecology and the environment.

How It All Began